Are The Days Of Paying With Good Old Fashioned Cash Over?

The evolution of cash came from a long historical line of tangible assets. It began as a bartering technique such as trading your beloved goat named Billy, for a beautifully made necklace in order to make your wife happy on your anniversary that you forgot about. Eventually, bartering turned to forms of coins whether it was made from gold, other alloy elements, or even seashells. Finally, after many years, currency turned into sheets of paper. Although we still use this form of money, the future has not only allowed money to be stored into plastic cards and even be imported to a cell phone for mobile usage, but we are now beginning to see the age of the bitcoin which is a digital payment system or better known as cryptocurrency.

You may be wondering why all of this is important and how this ties into real estate so let’s get into the topic at hand.

Millenials are eventually going to lead the world and this an unavoidable fact of life. This younger generation of people are always looking for advancements in technology and new ways to do things such as new forms of payments. Ben Shaoul, president of Magnum Real Estate Group makes a very valid point when he states, “Cryptocurrency is something that has been asked of us — ‘Can you take cryptocurrency? Can we pay that way?’ — and of course when somebody wants to pay you with a different form of payment, you’re going to try to work with them and give them what they want, especially in a very busy real estate market”.

We trust our mobile devices to securely store our credit cards so that we may use services such as Apple Pay, so why hasn’t bitcoin been used for transactions more often? The problem is due to the fact that cryptocurrency is still a fairly new concept so there is not much regulation going on and there is still confusion as to how taxes and bitcoins work in unison.

Cryptocurrency will most likely be apart of society’s plethora of payment types once all of the quirks are dealt with, but for now we can still count on looking to good ol’ Benjamin Franklin for closing a real estate deal.

Western Investor Network does not currently accept bitcoins, but we would love to help you invest your money so don’t hesitate to call us at 720-344-1174. 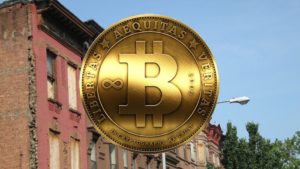